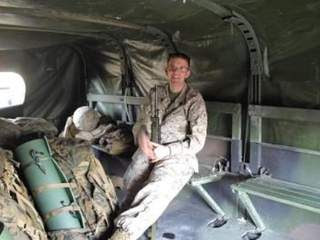 A Marine from West Chester, Ohio has been killed in Afghanistan.
The Department of Defense announced the death of Cpl. Lucas T. Pyeatt, who was supporting Operation Enduring Freedom.
Pyeatt, 24, died Feb. 5 while conducting combat operations in Helmand province.
He was assigned to the 2nd Radio Battalion, II Marine Expeditionary Force Headquarters Grou.
Posted by OEF News at 20:30

Email ThisBlogThis!Share to TwitterShare to FacebookShare to Pinterest
Tags: Helmand, U.S, US Marine