Danish soldier, Christian Raaschou was killed during a battle with Taliban insurgents on 31st March 2008. He was 24 years old and was a Private First Class with the Danish Royal Life Guards.
This was his 5th International deployment having previously served in Iraq.
His mechanized infantry unit was on a co-ordinated operation with British forces northeast of Gereshk when they came under fire. He died as he was being airlifted by helicopter to the field hospital at Camp Bastion.
Posted by OEF News at 03:34 No comments:

Private Anders Storgaard, serving with the Danish Royal Life Guards, was killed in action on 26th March 2008 in a battle with Taliban insurgents involvoing small arms fire, mortars and RPGs.
As the battle intensified, the Danish unit of 35 men was reinforced with artillery and helicopter gunships.
Private Storgaard and one other soldier were injured in the battle. As they were being airlifted to Camp Bastion field hospital, Private Storgaard died from his wounds.
Posted by OEF News at 04:56 No comments:

Two Danish soldiers lost their lives on 17th March 2008 in a suicide bomb attack on a NATO military convoy.
Sergeant Sonny Jakobsen, 45, (pictured above left) and Christian Damholt, a Captain aged 33 (pictured above right) were part of a Danish unit patrolling the city of Gereshk in Helmand province, alongside British and Afghan troops.
Several other soldiers were injured in the blast.
Posted by OEF News at 05:04 No comments:

Lieutenant Milan Sterba, aged 35, and serving with the Czech Army Special Operations Group, was killed along with two Danish soldiers, an interpreter and three Afghan civilians when a suicide bomber rammed his vehicle into a military convoy in Gereshk in Helmand province, Afghanistan on 17th March 2008.
He was posthumously promoted from Chief Warrant Officer to the rank of Lieutenant.
Posted by OEF News at 00:20 No comments:

Staff Sergeant Jens Mathias Petersen, 56, died in Denmark on March 13, 2008. He was taking part in a run when he collapsed from cadiac arrest. Treatment was provided by a US medical team in Kandahar and he was evacuated to Denmark on March 6.

To add to the misery for the family his wife, Aase Holst Petersen died shortly after with a blood clot in the brain. 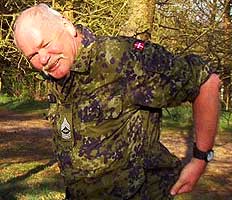