Lieutenant Michael Fussell was serving with the Special Operations Task Group when he was killed in action by an Improvised Explosive Device detonation while conducting a dismounted patrol in Uruzgan province, on Thursday 27 November, 2008. 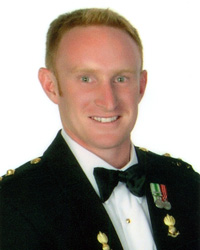 Lieutenant Fussell enlisted in the Australian Army January 2002 and was appointed as an Officer Cadet at the Australian Defence Force Academy. He completed a Bachelor of Arts and was a keen sportsman, with a strong interest in rugby.

He attended Royal Military College, Duntroon in 2005, commissioning in December 2005 into the Royal Regiment of Australian Artillery. On graduation he was posted to ‘A’ Field Battery, 4th Field Regiment, where he fulfilled a number of junior officer roles.

During his time at ‘A’ Field Battery he qualified as a paratrooper. He also deployed to East Timor on Operation Astute in 2006 and 2007.

Lieutenant Fussell was posted to 4 RAR (Commando) in January 2008 as a Joint Offensive Support Team Commander. He was a Platoon Commander for the Advance Infantry Course at Singleton and completed the Joint Terminal Attack Controllers (JTAC) course.

The body of Warrant Officer Nicolas Rey, killed 22nd November 2008 from the blast of an improvised explosive device (IED), has returned home to France.
The funeral procession passed through the city of Ardennais escorted by 30 bikers and the national Gendarmerie. Proceedings then took place inside the chapel near Dumerboin.
Posted by OEF News at 06:53 No comments:

9th November: Two Spanish soldiers have been killed and four more injured in a suicide attack in Shindand, Afghanistan, to the south of Herat, considered to be one of the most dangerous areas of the country.
The dead men have been named as 30 year old Corporal Rubén Alonso Ríos from Vigo, and 41 year old Brigadier Juan Andrés Suárez from Mieres, Asturias. Their vehicle, which was the last one of six armoured vehicles in a convoy protecting 12 Afghan lorries, was attacked by a van packed with explosives as they formed part of Afghan National Army convoy. The two men died instantly.
Posted by OEF News at 03:51 No comments:

Norwegian Private, Kristopher Sorli Jørgensen, aged 22, and serving with the Norwegian Home Guard was killed by a roadside bomb whilst on patrol 8th November 2008
The incident happened about 8km from Meymaneh.
Pvt. Jørgensen was attached to the Norwegian Command in Meymaneh.
Posted by OEF News at 22:32 No comments: