Italian Air Force Marshal, Arnaldo Forcucci, aged 41, died at the Italian Base Camp, Herat, on 15th January 2009 from a heart attack.
He was an operations planner for the Italian forces in Afghanistan.
He leaves his wife and a daughter.
Posted by OEF News at 23:34 No comments:

Private Gregory Michael Sher was killed in a rocket attack in Oruzgan Province, Afghanistan, on Sunday 4th January 2009, at 12:55 Afghan time (19:25 AEST).
Private Sher was a member of 2 Commando Company, 1st Commando Regiment, and at the time of the attack was with a Special Operations Task Group element that had deployed from Tarin Kowt to a provincial patrol base.
Private Sher was 30 years old and leaves behind his parents, two brothers and a partner, who are currently receiving support from Defence. 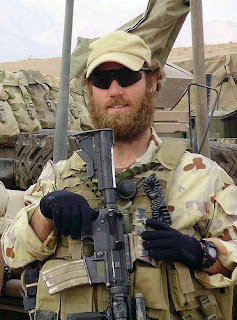 Private Sher was born in South Africa in 1978 and moved to Australia with his family in 1986. He joined the Australian Army in 1998 as an Army Reserve infantryman, serving with 5/6 RVR. Private Sher deployed on operations to East Timor with his regular infantry unit from November 2002 until May 2003.
Private Sher successfully completed the Commando selection course in 2004 and gained entry to Special Forces, joining the 1st Commando Regiment. He went on to complete the suite of Special Forces courses required to become a qualified commando.
For his service in East Timor, Private Sher received the Australian Active Service Medal, the United Nations Transitional Authority in East Timor Medal and the Infantry Combat Badge. Private Sher has also been awarded the Afghanistan Campaign Medal, the NATO Medal with ISAF Clasp, the Australian Defence Medal and the Returned from Active Service Badge.
Private Sher was buried following a Jewish funeral service with full military honours.
Posted by OEF News at 23:35 No comments:

British military fatalities in Afghanistan - 2008
Posted by OEF News at 10:10 No comments: