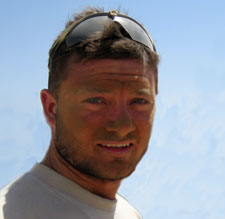 Sergeant Michael Ebert untimely death fills us all in the Danish Battlegroup with great sadness. His nearest lost a girlfriend, a son and a good comrade. We in the battle group has lost an exemplary officer, a good colleague and a good and loyal friend, as Sergeant Michael Ebert, 23 October died of injuries he suffered during a shoot fight in the bazaar area north of Gereshk.

Sergeant Michael Ebert was flying for the 2nd group in the 3rd Mechanized Infanterikompagnis 2nd division deployed with his unit during a patrol in the green zone.
He always led his group with great authority and confident belief in his own professionalism, since the device fell into an ambush.
The other units in the division engaged the enemy immediately while sick helpers gave first aid to Michael Ebert. Unfortunately the injuries after the shoot so severe that he later died from them, despite a laudable efforts of his comrades.

Michael Ebert was in the Company known as a deeply professional, purposeful and serious officer who was well liked and highly respected for his efforts here in Afghanistan, both his soldiers, colleagues as superiors.

Yesterday the sun went down after a sad day. Today, the sun got up again, and we continue to solve the tasks. We do this because we still believe that we are making a difference.
We do not let Michael's sacrifice be in vain. Been honored Sergeant Michael Ebert memorial.
Posted by OEF News at 03:06 No comments:

15th October 2009. Italian paratrooper, Corporal Rosario Ponsiano, was killed in an accident when a Lynx armoured personnel carrier crashed into a ravine at night on the road between Herat and Shindad.
Cpl. Ponsiano, aged 25, suffered serious injuries in the accident and died shortly after.
He served with the 4th Alpine Parachute Regiment (Matterhorn). He had been with the regiment since 2003 and had arrived in Afghanistan in August 2009.
Two other Italian soldiers were injured in the accident.
Posted by OEF News at 22:59 No comments:

Corporal Szymon Graczyk was killed along with his colleague, Corporal Radoslaw Szyszkiewicz when their MRAP vehicle hit a road mine (IED) while they were travelling in a convoy along Higway 1 in the Wardak province, Afghanistan, on 9th October 2009.
Four other soldiers who were wounded in the incident were rushed by helicopter to a base in Ghazni province for medical treatment.
The funeral ceremony took place on 14th October in his home-town Szczecin.
Both killed soldiers served in 5th Engineering Regiment in Szczecin.
Posted by OEF News at 02:48 No comments:

“A soldier does not die, a soldier goes away to stand on an eternal sentry”, said Polish Chief of GS Gen. Franciszek Gągor during th funeral ceremony of Corporal Radosław Szyszkiewicz on 15th October in Iwanowice, Wielkopolska province.
Cpl Radoslaw Szyszkiewicz and Cpl Szymon Graczyk both died, 9th October 2009, when their MRAP vehicle ran into an IED road mine while they were travelling in a convoy along Higway 1 in the Wardak province, Afghanistan.
Four other soldiers who were wounded in the incident were airlifted by helicopter to a base in Ghazni province for medical treatment.
The funeral ceremony of Cpl Szymon Graczyk took place, the day earlier, on 14th October in his home-town Szczecin.
Both soldiers served in 5th Engineering Regiment in Szczecin.
Posted by OEF News at 02:34 No comments:

Spanish soldier killed by road mine

A Spanish soldier has died in Afghanistan after his army vehicle drove over a mine near Syah Washan, on the outskirts of Herat, at around 9.30 local time on 7th October. The Defence Ministry names him as Corporal Cristo Ancor Cabello Santana from the Soria 9th Infantry Regiment.
He was on patrol with a convoy of the Fuerteventura Task Force to dismantle illegal checkpoints in the Pashtun Zarghun district, to the east of Herat, when the explosion happened, and it’s understood that five other soldiers who were in the vehicle with him were also hurt by the blast.
Posted by OEF News at 03:43 No comments:

German Army Corporal Patric Sauer, age 24, serving with the German 263 Parachute Regiment, died on 4th October 2009 in Mainz from injuries received from a suicide bomb attack in Afghanistan on 6th August.
Cpl. Sauer had been evacuated to a military field hospital in Afghanistan, then later air evacuated to Germany where he died.
Posted by OEF News at 01:06 No comments: