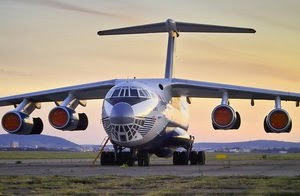 An Ilyushin Il-76 cargo plane belonging to Silk Way Airlines of Azerbaijan crashed into a mountainside in Afghanistan's Parwan Province at approximately 21.10 GMT on 5th July. The plane was flying from the Azerbaijani capital Baku to Bagram military base, carrying cargo for the International Security Assistance Force (ISAF).
Body parts have been found with the wreckage of the plane although no formal identifications have been possible.


It is not thought that any of the crew could have survived the crash. The airline has released the names of the nine crew members on board the aircraft.
Posted by OEF News at 15:06