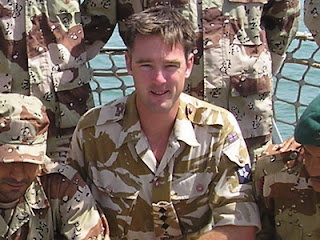 Major Josh Bowman was 34 years old and from Salisbury. He started his career in the British Army as a rifle platoon commander in B Company 1st Battalion The Light Infantry having commissioned from the Royal Military Academy Sandhurst in 1999.
As a rifle platoon commander he deployed to Northern Ireland as part of the Rural Reinforcement Battalion. In Northern Ireland he operated from an isolated patrol base and for his outstanding performance throughout this tour he was awarded a General Officer Commanding Northern Ireland commendation.
Following rifle platoon command he was posted as an instructor to the 3rd Battalion Infantry Training Centre in Catterick. He then returned to regimental duty in Paderborn, Germany, in the Armoured Infantry role as the Second in Command of D Company 1 Light Infantry.
He deployed on Op TELIC 3 to Maysaan province, Iraq, before then taking command of the Mortar Platoon.
It was following his Mortar Platoon appointment that Major Bowman began to broaden his horizons with numerous overseas postings. From August 2005 he completed a year in International Military Advisory Training Team (Freetown) Sierra Leone as the Operations Training Officer / Battalion Operations Advisor.
In September 2006 he returned to the UK as an SO3 instructor in the Junior Officer Tactics Division to the Land Warfare Centre in Warminster. On completion of his two year appointment he had been selected for promotion to major.
In August 2009 the Battalion conducted the Unit Move from Brunei to the UK and began the pre-deployment training for the Op HERRICK 12 deployment.
His Gurkha soldiers developed a natural respect and affection for a leader who balanced the best traditions of a rifle regiment soldier with humanity and hospitality that found him at home in A (Delhi) Company.
Major Bowman had led his company through some of the toughest fighting experienced by the Battlegroup on Op HERRICK 12 thus far.
He balanced the softer side of population centric counter insurgency with a genuine ability to motivate and lead his company onto the offensive when required.
Read report of the three Gurkhas killed
Posted by OEF News at 10:50