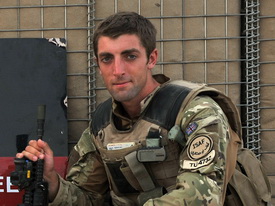 Lieutenant Neal Turkington was born in Craigavon in Northern Ireland and was soon to celebrate his 27th birthday.
After graduating from Imperial College London he attended the Royal Military Academy Sandhurst from 2007.
He commissioned into 1st Battalion The Royal Gurkha Rifles in August 2008 and went on to successfully complete the Platoon Commanders' Battle Course in Brecon, South Wales.
His first appointment at regimental duty took him to the jungles of Brunei where he quickly settled in at the helm of 2 Platoon within A (Delhi) Company.
Having settled in to regimental life in Brunei, Lieutenant Turkington continued his Gurkha education by attending the mandatory three months of language study in Pokhara, Western Nepal.
A keen adventurer and traveller he found many similarities between the foothills of the Himalaya and the other parts of the world which he travelled to so frequently, notably South America.
At the end of the language training he conducted a memorable trek through Nepal in support of the Gurkha Welfare Trust and perfected the art of speaking Nepali with an Irish accent.
On returning to Brunei Lieutenant Turkington turned his attention back to a profession that he showed a real zeal for. The demanding jungle of Brunei was the perfect environment for this passionate infanteer.
He had the highest expectations of himself and his platoon, to whom he dedicated himself wholeheartedly.
Lieutenant Turkington relished the intellectual challenges of infantry command as much as the physical.
Ambitious for his platoon, he was constantly challenging accepted practices in order to improve himself and his team, a trait that bore real fruits in the initial three months in Afghanistan.
Lieutenant Turkington was in his element as a junior commander and leader in Afghanistan.
The time and effort that he had dedicated to his soldiers over the previous two years was paying dividends every day in the toughest of environments.
Read report of the three Gurkhas killed
Posted by OEF News at 10:42