Thibault Miloche from the 126th Brive infantry regiment was killed by rocket. A second 126e soldier was also wounded in the attack. 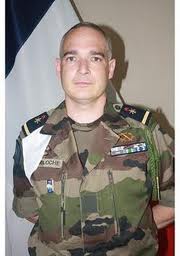 The soldier was hit by an RPG (Rocket Propelled Grenade) 14th October at around 5: 30 pm.
Seriously injured, he was evacuated to hospital in Kabul, but lost his life to the injuries he sustained on 15th October.
Thibault Miloche was 39 years old. He leaves a wife and two children in the Tarn-et-Garonne, France.

This brings to 50 the death toll in Afghanistan of French soldiers since 2001 in military operations, according to the Ministry of defence.
Posted by OEF News at 07:19