Sergeant Brett Till, a highly-respected Explosive Ordnance Disposal technician from the Incident Response Regiment in Holsworthy, New South Wales, was killed by an explosion that occurred during a route clearance task in Southern Afghanistan on Thursday, 19 March 2009. 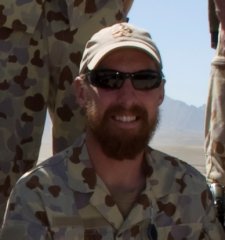 Sergeant Till, age 31, lived in Sydney with his wife and two children. His immediate family is currently receiving support from Defence representatives.
Sergeant Till enlisted in the Australian Army in 2001 and was allocated to the Corps of Royal Australian Engineers following recruit training. Sergeant Till trained as a Combat Engineer and served with a number of units, including the 1st Combat Engineer Regiment and the School of Military Engineering.
The Chief of the Defence Force, Air Chief Marshal Angus Houston, paid tribute to Sergeant Till and his extraordinary bravery.
“Sergeant Till’s selfless act to protect his mates and innocent civilians is a mark of the character of the man,” Air Chief Marshal Houston said.
“My thoughts and prayers are with Sergeant Till’s loved ones at this difficult time. His sacrifice will never be forgotten.”
Posted by OEF News at 23:22